The Climate Change-Related Disinformation Hubs in the U.K. 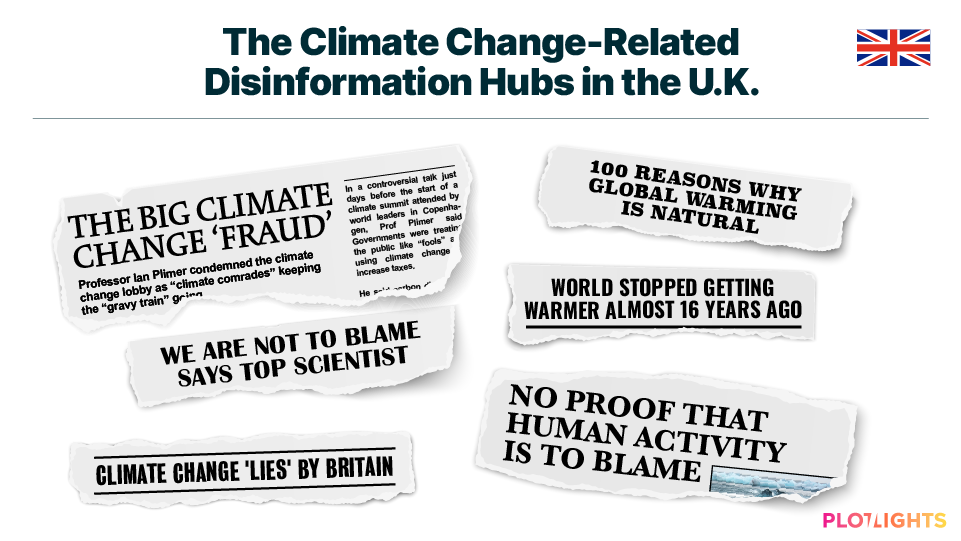 Already more than forty years ago, companies like Exxon knew that burning fossil fuels was changing our climate. Yet the industry powered many well-funded disinformation campaigns that only now public opinion catches up with the scientific consensus that climate change is indeed man-made – and constitutes the top global emergency requiring immediate action.

The Role of PR in Climate Change Disinformation

Public relations plays a crucial role when it comes to climate change-related disinformation. Between 2008 and 2017 alone, the fossil fuel industry’s trade associations spent almost $1.4 billion on PR, advertising, and other communications services. PR veteran Stephen Waddington recently said that “public relations must avoid becoming part of the problem”. But, according to Duncan Meisel – Director with campaign group Clean Creatives which is working to disentangle the PR industry from the fossil fuel industry – things are far worse: “The spread of climate misinformation can be directly traced back to firms with names like WPP, Omnicom, and Edelman. As long as they continue to engage in polluter relations, these firms will be one of our greatest barriers to climate progress. It’s time for PR and ad agencies to come clean.”

The Role of Journalism in Climate Change Disinformation

Even journalistic principles of balanced and fair reporting, aiming to give equal coverage to both sides of an argument, contributed to spreading disinformation about climate change. According to Alexander Petersen, an Associate Professor at the University of California, “having a non-expert oil lobbyist or politician respond to a peer-reviewed study or assessment by saying “climate change doesn’t exist” is not a credible argument or a means of balancing”.

There are a few initiatives looking to develop solutions to this issue and implement change. The Oxford Climate Journalism Network (OCJN) at the Reuters Institute for the Study of Journalism at the University of Oxford is a network that helps journalists by identifying the issues involved in the reporting of the developing climate crisis. Then there is Bloomberg Media which launched Bloomberg Green covering climate news and data-driven insights from Bloomberg’s global newsroom covering the latest in science, environmental impact, zero-emission technology, and more. A recent study demonstrates that such initiatives are having a positive effect as major print media around the globe have been reporting on climate change with a 90% accuracy rate.

The Role of Social Media in Climate Change Disinformation

Social media even acted as a catalyst in terms of climate change-related disinformation. Take the example of Facebook: In May 2021, the network claimed that they have simply been unable to stop misleading claims and narratives about the climate crisis from circulating on its platform. Other networks are also part of the problem: In the weeks surrounding Trump’s announcement to withdraw from the Paris Agreement, Twitter bots, created to delay action on climate change, accounted for a quarter of all tweets about climate change manipulating public opinion.

The combination of a complex media landscape and a highly politically charged topic creates a toxic atmosphere for all communicators. Today, many brands unknowingly place an ad with disinformative websites or work with such sites in different ways. This not only finances disinformation but causes direct damage to brands and organizations. Rather, communication experts need to have actionable knowledge about which publications and other media sources can be trusted and which cannot. This will inform all communication planning and control efforts. This is where Plotlights comes in.

Plotlights Analysis: The Climate Change-Related Disinformation Hubs in the U.K.

In the runup to the 2021 United Nations Climate Change Conference, Plotlights crawled U.K. online media for climate change-related coverage. Within the Plotlights platform, we activated a complex search profile covering the entire spectrum of the climate change discussion as well as a broad range of topics such as zero targets, sustainability, and renewable energy. In a second step, we focused on websites that are classified as not trustworthy by our partner NewsGuard. As an online rating organization, NewsGuard classifies a website as not trustworthy if “it generally fails to meet basic standards of credibility and transparency”. In a third step, we sorted these websites by three metrics from highest to lowest. The first metric is “reach” i.e. the number of people that have been exposed to the website and its content. The second metric, “Domain Authority”, is provided by SEO solution expert MOZ. Domain authority is a search engine ranking score that describes a website’s relevance for a specific subject area or industry. The third metric is what MOZ calls “Spam Score”. Such spam scores are not an absolute confirmation i.e. higher scores are typically associated with websites that show spammy behavior. Therefore, communicators should not see higher scores as proof but as a call to action to investigate the quality and relevance of the respective websites.

Climate Change Reporting by Disinformative Websites in the U.K. Grew Consistently in the Runup to COP26

For the last 12 months, from 10th November 2020 to 10th November 2021, Plotlights identified 29 disinformative websites active within the U.K. media landscape. Collectively, these websites have published a total of 5,986 articles on climate change. Throughout 2021, article volume increased steadily up until the beginning of the United Nations Climate Change Conference on October 31, 2021, and fell off a cliff thereafter.

Looking further into the data, we sorted the 29 disinformative U.K. websites by their reach. Reach within the Plotlights platform is calculated in a cumulative way i.e. individual article reach figures are added up to a reach sum for the entire website. Within our analysis, ZeroHedge.com is the clear leader in terms of reach since the website has many readers and also published the highest number of articles on the topic of climate change (about 1,700 articles in total). Websites such as presstv.ir, middleeastmonitor.com, or usadailyexpress.com appear to be non-U.K. – however, we include them in our analysis due to the fact they either produce U.K.-focused content or have a large U.K.-based readership. ThePoke.co.uk has been included since it has been rated as not trustworthy by NewsGuard and has published 61 articles focused on climate change.

The domain authority scores averaged across all 29 disinformative websites is surprisingly high with a score of 53. A score of 50 or higher is considered a ‘good’ score. What is even more surprising is that if you sort all disinformative websites by their domain authority score,  you get much higher numbers. In fact, there are 9 websites that score 54 or higher, with the highest score of 85.57 being allocated to ZeroHedge.com – a very good score.

Higher scores are typically associated with being an expert within a specific topical area. But, looking at good domain authority scores alone, as an example, will lead to wrong conclusions in terms of communications planning and control. In other words, websites with a high authority score present themselves as attractive media partners. But, if you look into their actual coverage, the overall evaluation may change fundamentally.

Take the example of presstv.ir which has a very low spam score of 7, which is considered good, and also a high domain authority score (75.16) which is considered very good. However, with a NewsGuard score of just 17.5 out of a possible 100, this website might not be the first choice for communicators.

The same goes for websites with higher spam scores. Disinformative websites can be, technically, very effective communicators. Take the example of presstv.ir which has a very low spam score of 7, which is considered good, and also a high domain authority score (75.16) which is considered very good. However, with a NewsGuard score of just 17.5 out of a possible 100 — and disinformation ranging from claims that the COVID-19 virus is an engineered bioweapon to 9/11 conspiracy theories —, this website might again not be the first choice for communicators.

That’s why today’s communicators need to complement standard digital PR metrics with newer data points such as the NewsGuard rating and look at all of these not isolated but in an integrated fashion. Only a combination of media intelligence metrics, backlink, and other SEO/VSO data, NewsGuard, and more will give communicators the insights they need to communicate effectively whilst protecting their brands.

Experience first-hand how the first fully-integrated Media Intelligence and Threat Intelligence platform can build and protect your brand. Reach out to us today!