Disinformation-as-a-Service Is the Next Big Threat for Communicators 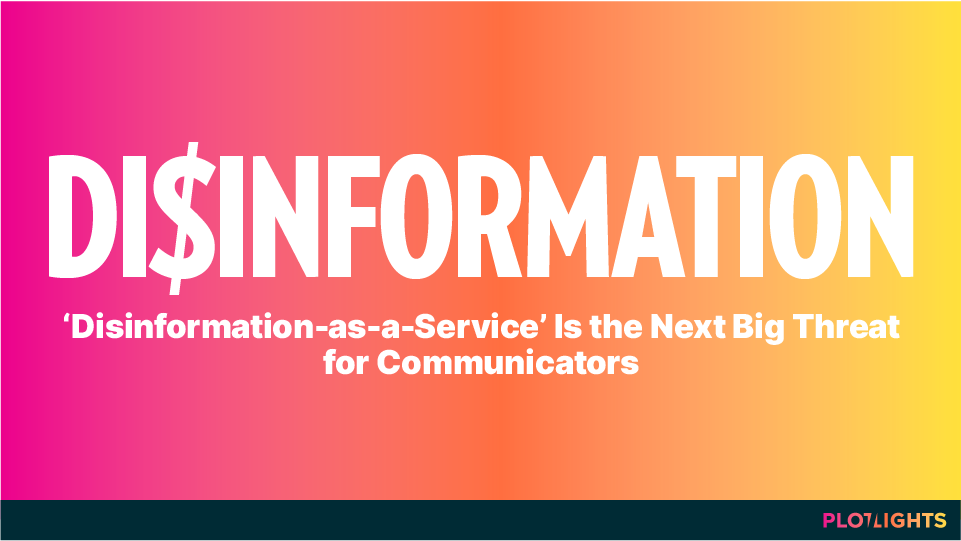 Best encapsulated in the oft-repeated line from recent Nobel Peace Prize-winning journalist Maria Reesa, “a lie told a million times becomes a fact”, the origins of the phrase are timeless with versions of it attributed to Lenin, Hitler, Goebbels, and others over the decades.

At its core though, what we’re talking about is weaponizing disinformation.

Once relegated to the world of social smear campaigns and politics – as the world saw in the 2016 presidential election – disinformation is now rearing its ugly head everywhere, sowing seeds of distrust in everything from climate science to COVID vaccines and now even in the corporate sector as well.

Whether used as an attack to tarnish a politician, question science or tear down businesses or brands, understanding the nature of the threat is imperative to be prepared for it in the future.

Just as Software-as-a-Service is a distribution model that gives you access to centrally-hosted software for a fee, Disinformation-as-a-Service, or DaaS, works in a fundamentally similar way.

You essentially buy a disinformation campaign – hackers for hire, lying for a price. Mistruths in bulk.

You wonder why? The reasons are endless – Influence. Power. Manipulating the narrative. Bringing down a competitor. Create suspicion.

Also, they’re cheap, making DaaS incredibly attractive. As PwC points out, “disinformation campaigns are asymmetric, meaning they are inexpensive to create and distribute at scale. DaaS providers now charge clients hundreds of dollars to hundreds of thousands of dollars for highly customizable packages.”

The degree to which they’re asymmetric is breathtaking. MIT’s Sloan School of Management concluded that “falsehoods are 70 percent more likely to be retweeted on Twitter than the truth, researchers found. And false news reached 1,500 people about six times faster than the truth.”

With disinformation spreading so fast, does the truth stand a chance?

The Role of the Dark Web for DaaS

First, we need to define the Dark Web. Norton describes it as being “made up of hidden sites that you can’t find through conventional web browsers. Instead, you must rely on browsers and search engines designed specifically to unearth these hidden sites.”

Add to that the anonymity provided by encryption and you have the perfect cover for nefarious pursuits.

Illicit and illegal transactions, content, and activity are rampant on the Dark Web and it’s where you can find everything from drug traffickers to ransomware experts to, yes, DaaS actors lurking in the shadows.

There’s a market for everything and the Dark Web is a go-to source for DaaS. DarkOwl, a Dark Web monitoring & intelligence company, for example, noted “several Ukrainian and Russian-speaking disinformation-as-a-service providers across the darknet with a considerable footprint for information-manipulation related offers and discussions.”

These operators pull from the same toolbox as any other marketing, branding, or public relations professional would. The only difference is the goal – to bring down a competitor, not raise up a client.

Given those ends, the unofficial rule of DaaS is don’t do it yourself. Create plausible deniability.

The Roadmap of a DaaS Scheme

The name of the game is shifting public opinion and the recipe is essentially a carbon copy of the work PR firms and social media marketers do daily. The DaaS “industry” may be in its infancy but using these well-tread PR strategies means maturation was swift.

To that end, organizations, politicians, state actors, and the like can more or less pick from a menu of options:

The New York Times, in a deep dive into a Chinese propaganda campaign, detailed a real list of services – and prices – from a private contractor, including:

What are the real-world implications of going down this rabbit hole?

Just take a look at what BioNTech-Pfizer has been dealing with:

How Can Communicators Prepare for and Respond to DaaS?

Given the bleak picture painted, it can feel demoralizing going up against an often anonymous enemy whose messages spread faster than wildfire. But, as fellow communications experts, you’re already well equipped to combat disinformation:

Deception isn’t new. It’s just become more sophisticated. The operation to spread it has become a business of its own right now, leveraging social media and more to get the message out faster than ever before. The attacks are more coordinated, the results swifter.

Manipulation for hire is here to stay and it’s called disinformation-as-a-service.

The solution isn’t to ignore it but rather to face it head-on, acknowledge it, and continue to work hard cementing the truth.